Garching near Munich as a centre of innovation: inexhaustible energy from nuclear fusion and the development of quantum computers

11.08.2021
Thanks to my colleague from the German Pirate Party, I have visited the university and research centre in Garching near Munich.

I have to say I was looking forward to my trip - several of my colleagues from the Faculty of Mathematics and Physics have worked or still are working there; the University and the Academy of Sciences have a long-standing cooperation with the institutions there. It is an example of successful European cooperation: besides the Czechs you will find contributions from Slovaks, French, Finns and many others.

The first of my stops was the Max Planck Institute for Plasma Physics. The institute is known for running the ASDEX Upgrade tokamak, one of the larger nuclear fusion facilities. Nuclear fusion is the process of fusing lighter nuclei (such as deuterium and lithium) to produce a heavier nucleus and energy. The European Union is (co-)funding this research because it is believed that nuclear fusion could serve as a virtually inexhaustible and safe source of energy in the future. Unlike nuclear fission (which is used in traditional nuclear reactors), it does not produce nuclear waste. Even if you simply brake of a fusion reactor, it would not cause much more damage than breaking a large plasma discharge tube. 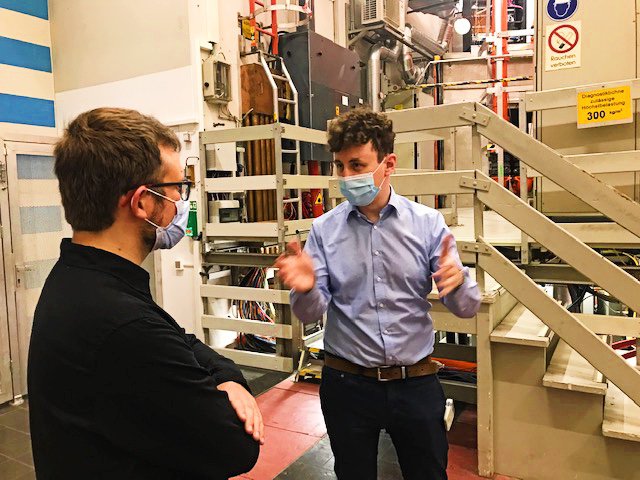 The challenge is to build such a reactor. The plasma has to be compressed, heated to temperatures of hundreds of millions of degrees to get the reaction going, and it has to stay in that state for long enough time - and it has to be held in that state by a magnetic field, because no material would withstand contact with it. Turbulence, the currents induced in such a plasma and the magnetic fields associated with them are the subject of a special branch of science - magnetohydronamics. But in addition to understanding its laws, mastering nuclear fusion requires the development of very durable materials for the reactor chamber, superconducting coils, powerful cooling and plasma heating devices.

At present, we can keep the plasma hot for tens of seconds, but this is still not enough for commercial exploitation of fusion. That's why the many times larger ITER international tokamak is being built in France. It is the second largest international science project ever (after the ISS) and the European Union is funding approximately half the costs. The first plasma should be produced there in 2025. Although ITER is supposed to be able to produce about 10 times more energy than it uses for its heating, the main goal is to develop and test the technologies needed to run a fusion reactor.

In the European Parliament, ITER is sometimes the subject of controversy - the expected cost is comparable to about half the national budget of the Czech Republic, and some colleagues find this too much. However, I still believe it makes sense to defend it - the money spent on European research and development of the most advanced area of European industry creates the know-how that ensures Europe's technological leadership.

Another place I visited was the Walther Meißner Institute for Low Temperature Research. I studied at the Department of Low Temperature Physics, so the name of the discoverer of magnetic field shielding in superconductors was not unfamiliar to me. After the war, he built one of the largest institutes for the study of low-temperature physics. It's now one of the centres for the development of quantum computers.

One thing is almost certain - you will never carry a quantum computer in your pocket. For quantum effects to persist and be observable, a quantum computer needs to be very well insulated from its surroundings. The slightest thermal fluctuation, ionizing radiation or impact of a molecule can destroy the information stored in them. Therefore, these systems are cooled to temperatures very close to absolute zero - they are evacuated and isolated from the world. Therefore, in addition to the special algebra that describes how they work, they require vacuum engineering, thin-film physics, cryogenic technology and other demanding modern disciplines.

Garching has a good fortune of being the meeting point for all this know-how. As well as the physicists and mathematicians involved in research, there are development workshops that produce their own experimental equipment. Alongside to the research facilities, there is, for instance, a start-up incubator. So, if you want to set up an enterprise doing business in this field, you can find premises here that are literally next door to a research institution, and a start-up capital for your development. This is the way, how the contact with scientists and engineers working on basic research is guaranteed. I honestly think that instead of pumping European money into growing rape plant and all such nonsense, we should be investing it in developing of the technology parks like this one. 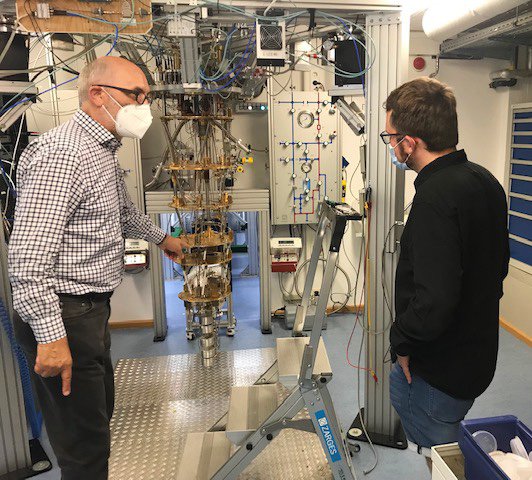 Naturally, the debate with the researchers could not leave out the 'main competitors'. As in plasma physics, it was mainly the USA and China that were mentioned (Russia not so much). The USA, because many researchers have returned from there as "the conditions are not so favourable anymore" and research is being taken over by private companies (such as Google etc.). The Chinese, on the other hand, are reputed to offer European scientists lecturing opportunities, well-paid positions, exchange tenures, etc. They are also known for sending representatives of a semi-state-owned enterprise that suddenly appear and buy up successful European start-ups that have developed interesting new technologies. Because, while Europe is keeping pace in the quality of scientific results itself, we are beginning to lag behind in the amount of money invested in developing and acquiring new technologies.

Frankly, I think that if anything is a threat to European civilisation, it is this technological lag. Instead of pointless debates about migrants and traditional families, we should concentrate on developing technology, because otherwise we really will miss the train.